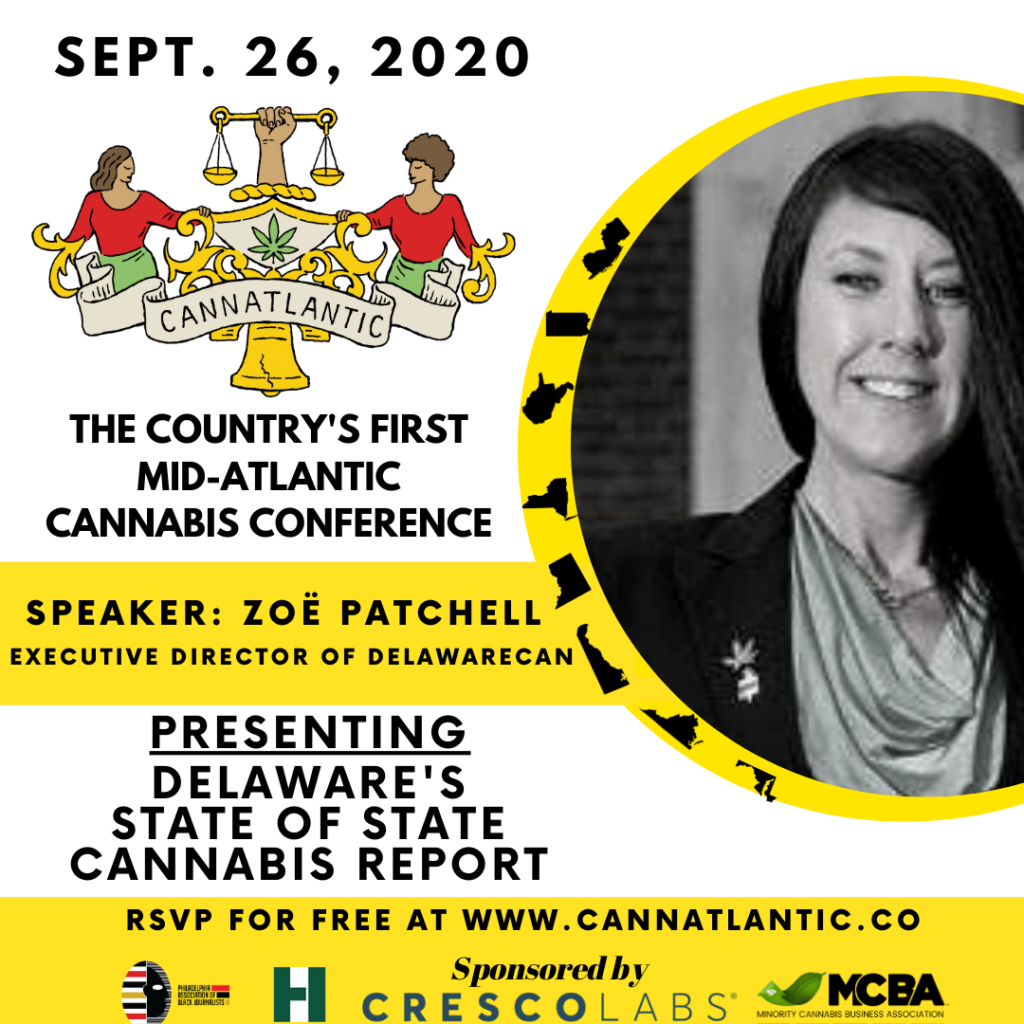 Zoë Patchell is the a paralegal, a cannabis legalization and criminal justice reform activist, a volunteer citizen lobbyist, and the President and co-founder of Delaware Cannabis Advocacy Network (Delaware CAN. She’ll be presenting Delaware’s State of State Cannabis Report. Check our schedule to see when her presentation is and be sure to register for our conference to participate!

In 2010, she joined NORML’s Women’s Alliance and began a budding network of support at local Philly NORML events. Zoë has participated in the movement nationwide in Pennsylvania, New Jersey, New York, D.C., Massachusetts, Maine, Colorado, and California, and has attended trainings with Students for Sensible Drug Policy, Northeastern Institute of Cannabis, Americans for Safe Access, Marijuana Policy Project, and the Silver Tour.

In 2013, Zoë took an opportunity to serve as co-founding board member and communications director for Delaware NORML. Later that same year, she founded the grassroots citizen advocacy group, Cannabis Bureau of Delaware (CBD), to create a legislative lobbying campaign in the First State and contribute to efforts to end cannabis prohibition at the federal level.  CBD advocated for the full implementation of Delaware’s Medical Cannabis law and was instrumental in passing a decriminalization bill in 2015, while also conducting a broad social awareness and education campaign on the benefits of cannabis and cannabis policy reform.

In November 2016, Zoë co-founded Delaware CAN, a 501(c)4 non-profit organization, to further advance cannabis reform in Delaware by expanding lobbying and advocacy efforts while building a network of advocates, organizations, and small business owners in support of cannabis legalization.   Delaware CAN has organized or participated in over 250 events to promote cannabis policy reform, including organizing citizen lobby days, town halls, rallies, information sessions, expungement/pardon seminars, advocate trainings, and regular outreach activities. Zoë has been a driving force behind the creation of a citizen-led lobbying movement in Delaware and integral in building relationships with legislators, alliances with organizations, and maintaining a constant positive presence at Legislative Hall.

Zoë is a well-respected spokesperson and source of knowledge on cannabis and cannabis policy with media appearances on local television, radio, print, and public access.  Her charisma, expertise, and public communication skills have guided the media messaging in Delaware, and she has used media strategically to advance reform efforts.

Throughout her tenure as a voice for cannabis reform, Zoë has lobbied state and federal officials in both Dover, Delaware, and Washington, D.C., and has worked with national reform groups NORML, MPP, and LEAP, in addition to other local organizations to end cannabis prohibition.   Her efforts to advance cannabis policy reform have put Delaware on the brink of legalizing cannabis, with a bill pending in the House of Representatives. She is currently working with her team implementing strategies, programs, and ongoing campaigns in a joint effort with Delaware NORML to promote the active legislation that will be voted on in 2020.